What Does Mountain Gorillas Reveal through their Teeth? 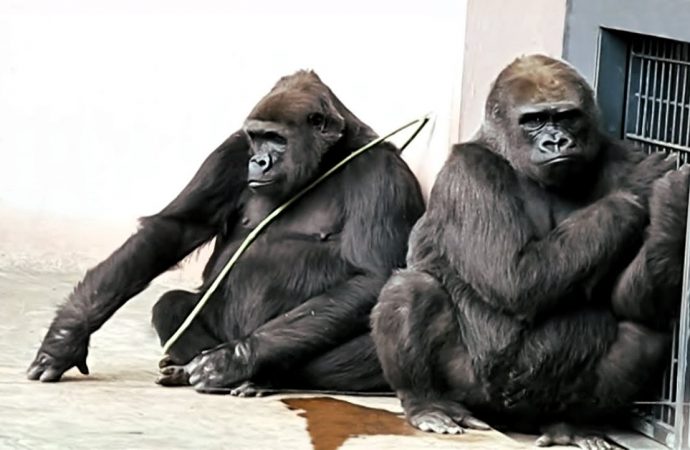 Mountain Gorillas at Volcanoes National Park in Rwanda eat up to 30 kilos of plants a day and their diet is varied in an increasingly fragmented habitat by poaching and deforestation. A study shows for the first time how the dental morphology adapts to available food.

US/RWANDA – Only remaining populations of mountain gorillas (Gorilla beringei beringei) are in the southern part of Virunga Volcanoes, between Rwanda, Uganda and the Democratic Republic of the Congo, and Bwindi National Park in Uganda. These great apes, considered endangered in the Red List of Threatened Species, are threatened by poaching, disease transmitted by the tourists who venture into the bush and deforestation due to high population density.

To protect these gorillas is key conservation of their habitat, where the basis of their diet consisting of wild celery or bamboo, bramble berries and roots. For this reason, a team of scientists, led by primatologist Jordi Garbany, has analyzed for the first time how eating habits affect these primates who spend much of their time to eat up to 30 kilos of plants per day.

The new study, published in the American Journal of Physical Anthropology, reveals that these habits contribute to tooth wear, and that their dental morphology to available food adapts habitat. This shows that the animals get used to the ecological conditions that surround them.

“These data are very important because if we found a dead gorilla at some point can attribute age from their teeth and perhaps identify from among the gorillas that have disappeared from the study groups or groups of tourism” says Garbany who works for the Center for Advanced Studies on Human Paleobiology , George Washington University (USA).

The results were obtained from the calculation of the percentage of existing dentine in the remains of gorillas identified. They knew the date of their deaths, age and lifestyle thanks to the work of the International Karisoke Research Center of the Dian Fossey Foundation. Through analysis, the researchers found that the abrasive particles present in the roots accelerate the loss of enamel in molars, regardless of the age of the gorilla.

According to the pioneering work, these great apes have less deterioration in their teeth than their coast counterparts. In addition, “we have seen that the mountain gorillas have a very low wear compared with other primate species. Therefore, a change in diet could affect the quality of life of gorillas, as has been documented for other primates,” says the researcher.

Improve the protection of mountain gorillas

The study of the available data on feeding patterns of mountain gorillas collected since 2001 and notes that these studies help to understand the evolution of these animals.

“The teeth and morphology are directly related to its functionality.  Their little deterioration, even lower than other populations such as gorillas coast shows that are adapted to relatively soft diets, very based on leaves and ground vegetation, but not fruits with rinds or hard seeds,” says the Spanish researcher.

Scientists propose that projects be launched to analyze the mineral composition of the soil, its relationship with the abrasive effect of vegetation and make a catalog of foods that produce this deterioration in order to better understand the adaptations of these animals.