How do Different Mutations Interact? 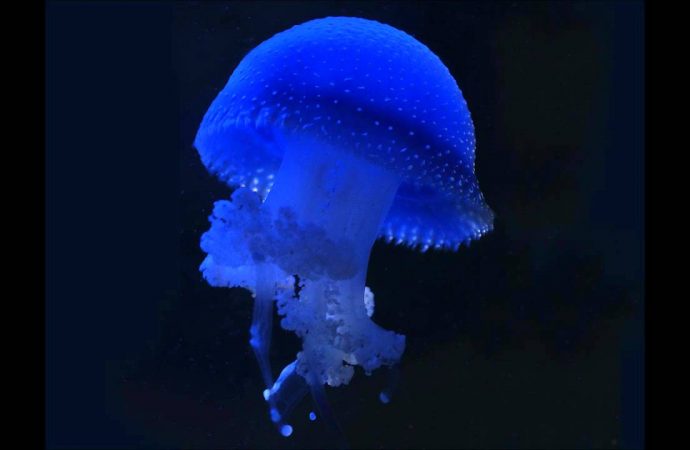 The analysis of more than 50,000 variations of a gene from a fluorescent jellyfish transferred to a bacterium helps us understand the effect combining mutations.

SPAIN – The jellyfish Aequorea victoria is a marine organism unknown to the general public. Yet without it scientist would not be able to make some of the most significant scientific advances in recent decades.  Its importance lies in it containing a green fluorescent protein (GFP), responsible for bioluminescence. Applications of this pigment (which led to the Nobel Prize in Chemistry 2008) multiplied when it was possible to transfer the gene PVF to other organisms.

This allowed to be used as a biomarker, and become visible what hitherto invisible. The gene PVF modification has led to new versions blue and yellow fluorescence used as a tool for marking with fluorescence cell structures in different organisms and thus be able to observe through the microscope.  The finding has revolutionized biomedical research and has enabled fascinating research in the field of optogenetics.

Now, researchers at the Center for Genomic Regulation in Barcelona have used the gene PVF encoding in studies of evolutionary genomics. The goal is to understand how changes in DNA (genotype) of an organism combine to affect their traits, characteristics and even disease (phenotype). Studying thousands of variations of the gene, scientists have drawn a detailed analysis of how changes in this gene change their function portrait. Their results were published last week in the journal Nature.

Mutations are changes in a nucleotide sequence (one of the four letters that form DNA) which may affect the characteristics of an organism and are the engine of evolution. These modifications can result in small changes, such as different hair colors, or cause significant changes, for example, cancer. Most previous studies have examined changes caused by the mutation of a single nucleotide genetic sequence, but real life is much more complex than that.

One of the most interesting aspects of the study is that reflects recent effect of one, two or multiple mutations in the fluorescence levels of the resulting proteins. To do this, scientists have generated more than 50,000 mutations in a gene version PVF and transferred to bacteria in the laboratory. This allowed them to see exactly what changes appear in each of the altered versions of the gene, and relate this information to the brightness variations of fluorescence in the resulting protein.

In addition, scientists built an ‘adaptive landscape’ and mapped how the different mutations and combinations changes gene green fluorescent protein interact to affect the brightness of the resulting protein. The genetic changes that appear in the ‘peaks’ produce fluorescent glow, while appearing on the edges.

“The adaptive landscape is an abstract concept that simplifies and illustrates our idea of how the characteristics of an organism come from its underlying genetic makeup. This is the first time someone generates actual data graphically represent this concept, noting combinations of genetic changes and not only taking into account the mutations separately and individually,” explained Fyodor Kondrashov, lead researcher of the study.

According Kondrashov, the path opened by his research could end up predicting the effects of different combinations of mutations. “If we can understand and draw adaptive landscapes genes, cells and someday even whole organisms could know much more about biology, which combination of mutations cause cancer or other diseases, or evolutionary changes that result in a feature like the trunk in elephants.”