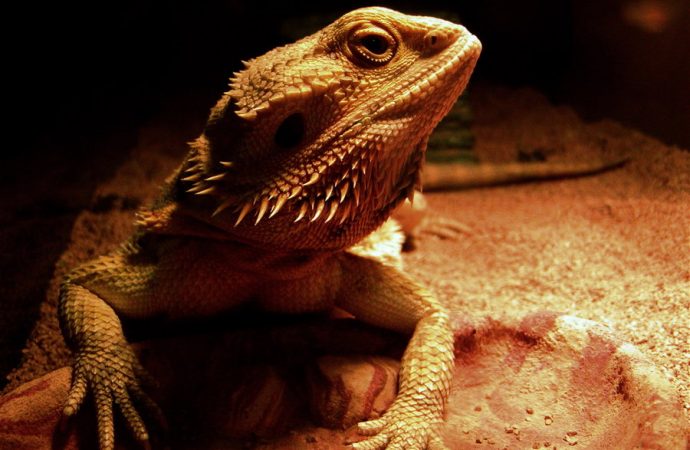 Sleep is a crucial activity for mammals and now a new study confirms the same for some reptiles. Through brain analysis of bearded dragons (Pogona vitticeps) they observed two stages of sleep similar to those of other animals, including humans. These finding suggests that developments in the rest systems began more than 300 million years ago.

GERMANY – Most animals sleep or rest, but until now, it was thought that only mammals and birds shared patterns like rapid eye movement (REM), at which humans have dreams or nightmares.  Thanks to a new study, we can add that too to an Australian lizard to the same category as such animals.

The bearded dragon (Pogona vitticeps) is dedicating six to ten hours a day to rest.  A group of German researchers monitored their brain activity during this time looking for electrophysiological characteristic movements of sleep: the slow wave (SW) and rapid eye movement (REM).  The results published today in Science confirm that these reptiles passed through these phases in periods of 80 seconds.

“Among mammals, there tends to be a direct relationship between the size of animals and duration of each sleep cycle. It does not happen the same with bearded dragons,” declares Sinc Gilles Laurent, one of the authors of the study. “The patterns of these lizards are much shorter and more frequently than one would expect if you consider its size.”

While humans during REM sleep last more than one hour per cycle, half an hour for cats and 15 minutes for rats, bearded dragons is just 80 seconds in this state. Throughout the rest period these animals showed this pattern repeated up to 350 times. “Perhaps this anomaly is due to neuronal activity occurred in an area of the brain-the anterior dorsal crest different from that of mammals -the crust- in ventricular” said Laurent.

Experts note that the cycle could be affected by the cold-blooded reptiles. Like lizards can control their body temperature, they need to have their active nervous system longer, reducing the pulse duration, speed and synaptic transmission between neurons.

“Our study suggests that sleep patterns began to evolve for each species, at least 320 million years ago,” says the scientist. The research sheds new light on the common ancestors of reptiles, birds and mammals: amniotes.

Amniotes are a group of tetrapod vertebrates that inhabited the Earth when it was not yet divided into continents.  Scientists suggest that states SW and REM sleep evolved differently for mammals, birds and reptiles but they were the same originally.  In light of this finding, the authors of the study believe it would be useful to conduct analysis in amphibians and fish to see if sleep patterns could go back further in time.

“At the moment, how and why began to evolve sleep remains a mystery”, says Gilles Laurent.

This discovery opens the door to further studies on whether animals can dream. “The concept of ‘dream’ is something linked only human and some people consider that it is essential to be aware,” Laurent says.

However, although still not known for sure, experts believe that this statement should not be so emphatic if one considers that these phenomena are the result of a very slow evolutionary process and that all the factors involved are not known in the formation of dreams.

“If you are willing to accept that bits of ‘neuronal reproduction’ in certain areas of the brain during sleep can be called dreams, one could say that lizards have something like dreams,” said the scientist.