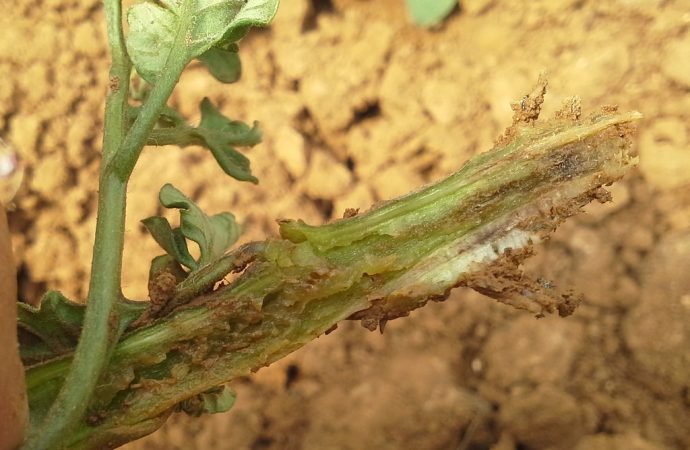 The pathogen disguises itself with a similar molecule to its host to avoid detection by the immune system of plant.

SPAIN – In wars, for example, some mimic the enemy’s uniform in order to sneak in and surprise them in attack. This action is called false flag operation and is very similar to that used by the fungus Fusarium oxysporum to infect plants and avoid detection by the immune system. This fungus causes significant damage to crops such as banana and tomato.

A team of scientists from the University of Cordoba (UCO) has found the fungus is a small protein very similar to the vegetable of the intended victim, which not only blocks the defensive action, but also becomes more aggressive invader.

The balance between acidity and alkalinity is essential for all organisms and also in the plant kingdom.  Plants move in a cutting edge around a neutral pH.  Soil and other environmental factors can upset the balance and affect its development. For example, a more alkaline environment makes the root curb its growth, so the acquisition of nutrients slows down and affects plant habit, which secretes a hormone called RALF (Rapid Alkalinization Factor) to regulate its own pH and thus grow and develop properly.

Many fungal pathogens have the ability to raise the pH of the plant, although so far neither alkalization mechanism nor their importance in infection is known.  Now, the team of UCO, led by Antonio Di Pietro, described the increase in pH activates a protein essential to attack the plant fungus. This effect was described in the doctoral thesis of David Segorbe.

But scientists have gone further: “In analyzing the genome sequence of the fungus Fusarium oxysporum observed that had a sequence identical to that encoding the hormone RALF plants , ” says Di Pietro, professor in the Department of Genetics at the UCO. The researchers propose that, throughout evolution, the fungus may have imported this gene directly from the plant.

Like other pathogenic microorganisms such as bacteria, fungus manipulates its host not to be attacked by their immune system. To do this, invading microorganisms have developed a special type of molecules called effectors that attach directly on the body attacked, making it believe that is part of its plant.

In an experimental work in tomato (Solanum lycopersicum), the researchers found that the plant does not recognize the fungus as foreign, employing similar effector RALF whose genetic sequence shares with the plant genetics.

Thus, the parasite manages to wriggle out of the defensive system while modifying the pH of the plant, alkalinity. At the most basic environment, the effect is twofold: not only stop growing the root of the plant, but the invader itself becomes more aggressive. This work was recently published in the journal Nature Microbiology.

Manipulating plants do not fall into deception

Scientists then asked if a plant was not able to respond to the pH would be less affected by the false flag attack by the fungus. From this hypothesis, the group studied fungus infection in a mutated Arabidopsis thaliana plant model that did not possess the receptor for the hormone RALF. Those plants that had altered its system of regulation of pH were not able to not recognize the ruse of the invader, which were less affected by the attack than those who fell into the trap.

Following that discovery, some scientists and companies now want to prevent the trickery of the fungus and strengthen the defense system of the plant by manipulating the hormone receptor RALF.  “You want to prevent the crops of commercial interest are handled by pathogens,” summarizes Di Pietro.  Among others, it aims to implement this strategy on banana (Musa paradisiaca), a crop that is severely affected by the attack of Fusarium oxysporum in producing countries.