Water Repellent at your Fingertips 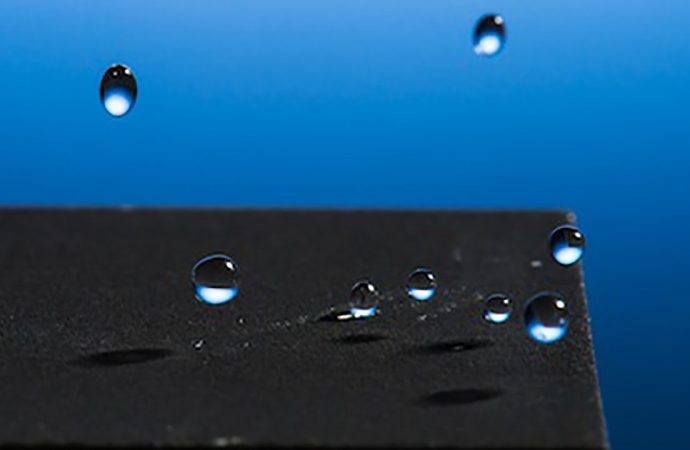 AUSTRIA/SWITZERLAND – the Lotus-effect can easily repel water droplets from leaves. Many materials have been developed, which are also highly water repellent, hydrophobic, thanks to their fine structures on the surface. A group of European physicists have now succeeded in developing a novel surface. As they reported in their work published in the journal Nature, drops of water as a function of voltage adhered more or less well. On the basis of these results, for example, window panes could be developed in future, that water simply rolls off at your fingertips.

Thomas Greber of the Physics Institute of the University of Zurich and one of the authors said that their model system is able to understand more precisely the fundamental phenomenon of friction of fluids on surfaces. Together with colleagues from the Technical University of Vienna and the Belgian Katholieke Universiteit Leuven they deposited only one atomic thin layer of boron nitride on a support of the metal rhodium. The boron and nitrogen atoms arranged itself in a slightly corrugated honeycomb structure, which was only a tenth millionths of a millimeter (nm) thick.

On this layer of boron nitride the researchers used a drop of water. They expected it will stick but when voltage was applied to the water drops, the forces of the adhesion changed. This effect is shown with specially developed equipment which determines the contact angle between the boron nitride layer and the changing, curved surface of the drop measurement.

Structural changes in the boron nitride layer were responsible for this effect. So hydrogen between the boron nitride layer and the backing of rhodium camped with voltage applied. Hydrogen-rhodium bindings were formed from it and the previously slightly undulating surface became increasingly flat. The researchers attributed the variable adhesion to this electrically switchable structural change.

Stijn Mertens from the Vienna University of technology said that it is now conceivable that the wettability by water or other liquids with a further developed version of their material they could be able to switch the surface between hydrophilic and hydrophobic. Thus, a windshield could be constructed which rolls off the water at your fingertips. But also for the analysis of aqueous, biological samples, the switching mode of water adhesion could be interesting to control adhesion and migration of cells.