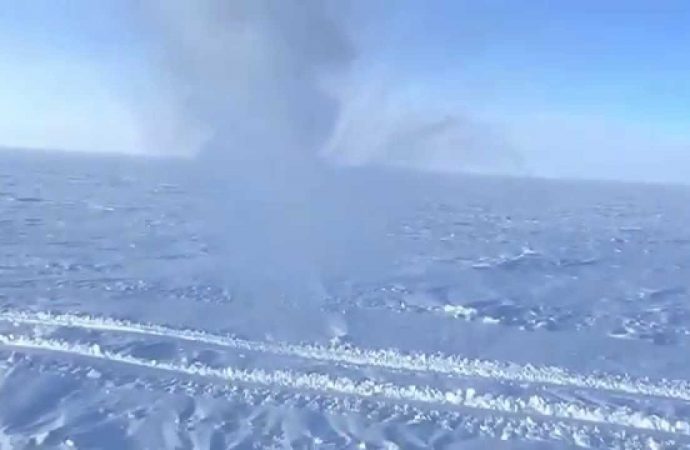 Under the glossy cover of eastern Antarctica, a little-known region, lies a network of giant canyons, a thousand kilometers long, and probably a huge water reserve, similar to Lake Vostok. That's the conclusion of researchers who spotted curious surface formations.

Long depressions roam the land of Princess Elizabeth, in Eastern Antarctica. Imperceptible to the ground, they appear in images taken by the satellite Aqua of NASA with the Moderate Resolution Imaging Spectroradiometer (MODIS) spectrometer, and analyzed the radar by the Canadian Radarsat satellite.

These kinds of valleys extend over more than a thousand kilometers in length, and are places 10 km wide, with a depth of up to 1km. They form a network within which appears even more discreet, an area with a very flat topography, covering about 1250 km2 and extending over 140 km in length and a width, irregular, of about 20 km.

An international team of researchers deduced the presence of huge canyons subglacial corresponding to surface depressions, which would contact a lake invisible subglacial just below the flat surface. Deep structures may indeed occur at the surface, by slightly modifying the slopes or terrain, affecting how the ice moves and which snow is deposited. Conspicuous phenomena by instruments like MODIS spectrometer or radar synthetic aperture. In 2011, the Goce satellite had spotted a serious gap pver there, indicating the probable presence of a pond or lake.

With its dimensions, this mysterious lake is smaller than the famous Lake Vostok, a Russian drilling had reached in 2012 to analyze the water and look for any possible living organisms. The DNA of bacteria and species animal was discovered. For possible exploration (which nobody speaks now), the “lake of Princess Elizabeth” is more accessible than Lake Vostok. It is separated into effect one hundred kilometers from the nearest research station, as highlighted by Martin Siegert in an article in New Scientist.

The researchers presented their findings during a conference in Vienna, and published them in the journal Geology. The region is poorly known and a better understanding of the movement and structure of the ice sheet is essential to understand how this mass of water can respond to climate change.