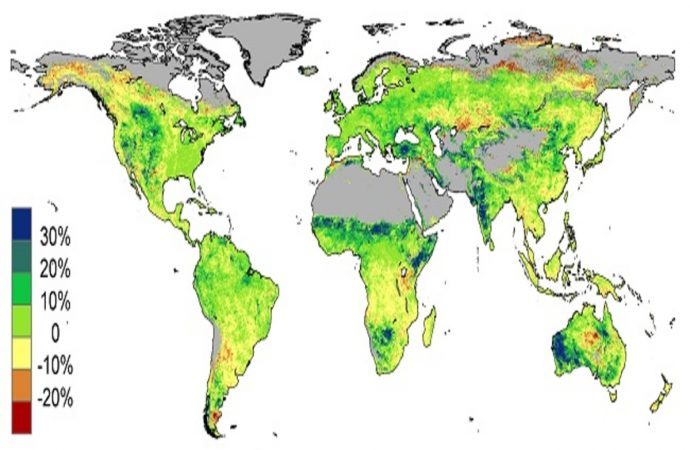 This is attributed to the fertilizing effect of carbon dioxide in the atmosphere.

Earth has become greener in the last 33 years. This is the main conclusion of an international study, published April 25 in Nature Climate Change, which has detected a significant increase of green biomass leaves, in 40 percent of the world’s regions from 1982 to 2015, while it has only seen 4 percent significant loss of vegetation.

The research was conducted from the comparison of satellite images in the indicated period, allowing capture of increased land leaf surface. Specifically, since 1982 our planet has greened in about 36 million square kilometres. It seems that this phenomenon has occurred primarily as a result of fertilizer effect that carbon dioxide (CO2) from atmosphere has on plants.

“With this study, we have attributed the greening of the planet to rising levels of atmospheric CO2 caused by fossil fuel consumption,” says Penuelas, CSIC researcher at the Centre for Ecological Research and Forestry Applications (CREAF). Having more carbon dioxide, plants have harnessed to generate more leaves through photosynthesis. As a result, the increase in the concentration of this greenhouse gas has been slowed.

This increase in green area “could change the cycles of water and carbon on a global scale,” adds Penuelas. Other studies had already identified before the increasing ability of plants to store carbon from 1980, consistent with the idea of planetary Greening defending this study.

However, this does not mean that the increase in atmospheric CO2 is positive for the climate. Despite the more leaves, “climate change, increasing global temperature, sea level rise, melting or becoming more intense tropical storms are a fact,” asserts Penuelas. He adds that “the fertilizing effect of carbon dioxide is becoming smaller as the plants are acclimated to this increase or miss other resources especially phosphorus for growth, such as water or nutrients.”

This fertilization by the CO2 is the main reason (70 percent) by which the Earth is greening. But the study also identifies climate change (by 8 percent), atmospheric nitrogen (by 9 percent) and changes in land use (by 4 percent) and other reasons that will follow to see how the vegetation changes on a global scale.