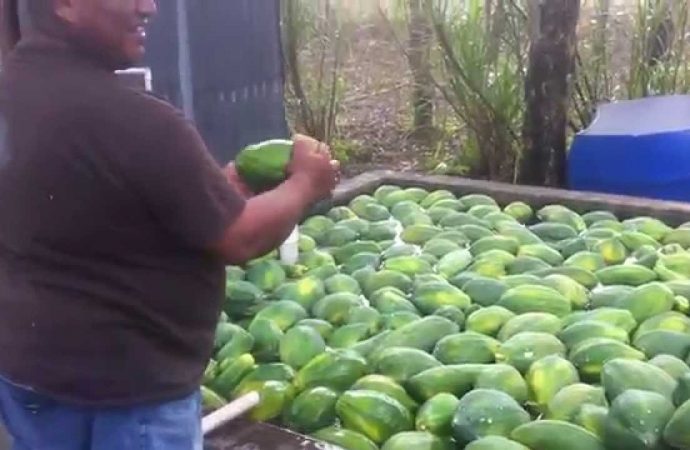 They have nutrients that prevent disease such as diabetes and metabolic syndrome.

MEXICO – The Center for Scientific Research of Yucatan (CICY) developed two new types of papaya Maradol, known as Kanput and Chakput, which have nutrients that prevent disease such as diabetes and metabolic syndrome.

In an interview with the News Agency of the National Council of Science and Technology (CONACYT), researcher Jorge Santamaría Fernández explained that the papayas were developed by a micropropagation protocol.

He said that they are interesting varieties in the sense that they are similar to the Maradol but a very small in size. They have a yellow and a red variety with different contents of lycopene and beta-carotene that make it interesting in terms of nutritional and commercial value for the export market.

Since papaya is eaten fresh frequently, these two new products have the advantage of being not only nutritional but also nutraceutical; with a steady intake can prevent disease.

Fernández said the idea is to try to produce varieties with higher content of antioxidants and vitamins so that it can contribute to long term disease prevention program.

Now a major challenge for research is the Carica papaya. It has different sexual types: male plants, female plants and hermaphrodite plants. Fernandez said that since agronomically the producer seeks hermaphrodite varieties of plants, the seed production pathway used frequently is impossible to obtain hermaphrodite seeds in full.

To counter this problem, the researcher said packages with three seeds grown for three months until, sexed, can be eliminated with hermaphrodites. However, this is more expensive because they must invest six thousand plants per hectare of which only two thousand are helpful therefore wasting about four thousand.

The researcher said that what they did was a biotech development where, using micropropagation techniques, they cloned only hermaphrodite plants so that they now offer the producer plants which are only hermaphroditic and has no selection problems.

Although the project was developed on an experimental basis with a limited number of plants for evaluation (about 10 thousand of every variety), now the aim is to increase the amount.

In addition, through the company znova Agro and CICY developed an alliance with the agro-business sector to evaluate the agronomic potential Kanput and Chakput, in order to expand the technological base to produce on a larger scale and seek export markets. The second stage of this work is scaling 600 micropropagated seedlings where they will be sown in a crop opencast in the coming months for further extensive scaling and commercialization.