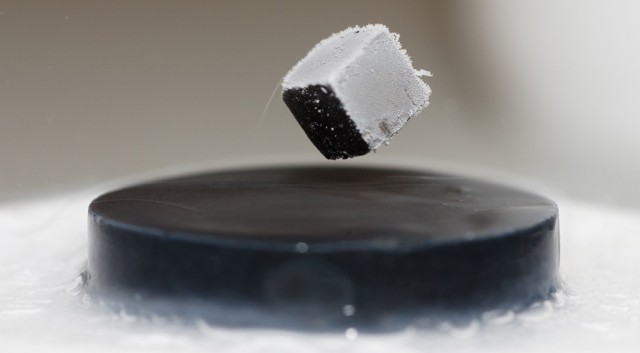 SPAIN – The quantum behavior of hydrogen affects structural properties of the hydrogen sulfide-a compound, which when exposed to extreme pressures, has the highest detected (so far) superconducting temperature properties. This is a breakthrough in the search for room temperature superconductors; very longed for but yet to be undiscovered.

The theoretical results suggest that the quantum nature of hydrogen (ie, the possibility of particles behaving as a particle or as a wave) significantly influences the structural properties of hydrogen-rich compounds (potential superconductive substances ambient temperature). That is precisely the case of hydrogen sulfide superconductor, smells like rotten egg, which when exposed to pressures a million times greater than atmospheric pressure, it behaves like a superconductor temperature – the largest ever identified.

Superconductors are materials that conduct electrical current without electrical resistance.  Conventional low temperature or behave as such when the substance is cooled to temperatures near absolute zero (-273 C or 0 Kelvin).  However, last year, German researchers identified the superconducting properties of high temperature hydrogen sulfide, which becomes superconducting at the highest temperature ever discovered: -70 C or 203 K.

In classical or Newtonian physics, it is possible to measure the position and momentum of a moving object to determine where it is going and how long you need to reach the destination.  These two properties are inherent.  However, in the strange world of quantum physics, according to the Heisenberg uncertainty principle, it is impossible that certain pairs of physical quantities and complementary observable of a particle are known accurately at the same time.

Hydrogen is the lightest element of the periodic table, so it is linked to the atom quantum behavior. Its quantum nature influences both structural and physical properties of various hydrogen compounds. As an example, high pressure ice where proton quantum fluctuations cause a change in the way in which molecules bind to each other, even symmetrize chemical bonds between atoms. The study investigators believe that in the superconducting quantum hydrogen sulfide symmetrization links similar to the way hydrogen occurs.

Quantum behavior is the key

Researchers have made calculations considering the hydrogen atoms as quantum particles with wave behavior, and have concluded that these are symmetrical links to a similar experimentally used by German researchers.  In this way, they have managed to explain the phenomenon more precisely, since previous studies calculations were performed by treating the hydrogen atoms as classical particles and could therefore not understand the behavior observed experimentally.  All this shows that behind the high-temperature superconductivity in the hydrogen sulfide quantum behavior is the key.

Researchers are pleased that the good results obtained in this research show that quantitative predictions and computation can be used with full confidence to accelerate the discovery of high-temperature superconductors.

According to calculations, quantum symmetrization of the hydrogen bonds have a major impact on the vibrational properties of superconducting and hydrogen sulfide.  “In order to theoretically reproduce the dependence of the temperature at which superconductivity occurs, it is essential to consider quantum symmetrization” explains Ion Errea, principal investigator of the study.

This theoretical study shows that in the compounds rich in hydrogen, the hydrogen quantum motion can greatly influence the structural properties (and even modify the chemical bond), and in the electron-phonon interaction that leads to the superconducting transition.

According to researchers, theory and computation have played a key role in the search for superconductors hydrides exposed to extreme compression. The future goal is attempt to increase the temperature until at room temperature superconductor, but radically reducing required pressures.

This research was published in the prestigious journal Nature.