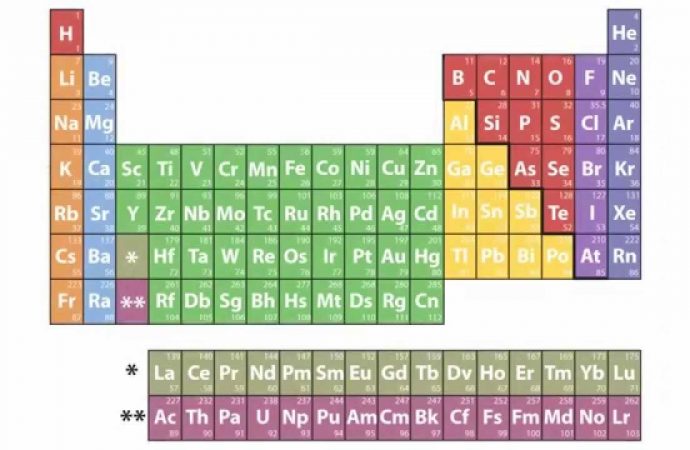 There will soon be new elements in the periodic table, including three named in honor of Japan, Moscow and Tennessee.

US – There are four new recommended by an international scientific commission terms. The International Union of Pure and Applied Chemistry (IUPAC), which decides which items to include in the periodic table, presented its proposal to be revised. The new elements were proposed by scientists who discovered them.

The four elements, known by their numbers, filled the seventh row of the table when the organization confirmed its existence in December.

Tennessee is the second US state that has a chemical element named in his name; California was the first. The names usually come from geographic locations, mythology, scientific name or referring to some characteristic of the element. For example americium, einsteinium and titanium.

Of course there are also the best-known names such as hydrogen, carbon or lead.

The new elements are:

– Moscovium: Will have the Mc symbol, and is the 115th element.

– Tennessine: Will have the Ts symbol and the number 117.

Joseph Hamilton, a professor of physics at Vanderbilt who played a role in the findings, proposed naming an element in honor of Tennessee. Tn was hoped to be used as the symbol but it had already been used in the past and could not be reassigned to the new element.

– Nihonium: Will the Nh symbol and is the element number 113. It was discovered in Japan, and Nihon is a way of saying the country’s name in Japanese. It is the first element to be discovered in an Asian nation.

– Oganesson: The element is named after the Russian physicist Yuri Tsolakovich Oganessian. It will have the symbol Og and the number 118.

The proposed period table changes is open for the public to give their comments and will conclude on November 8.