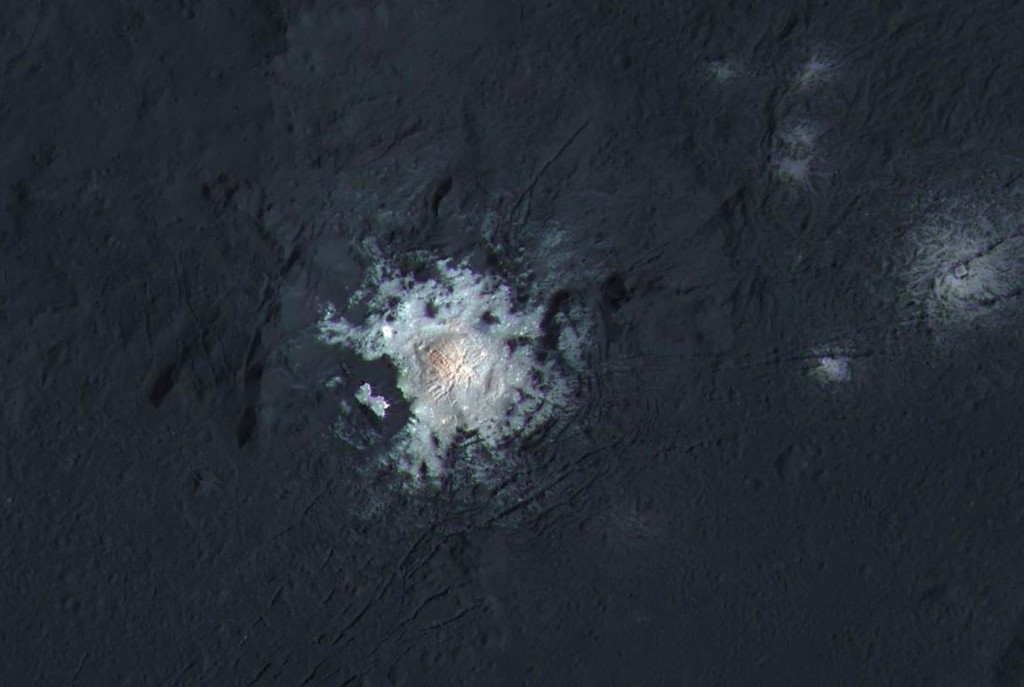 Dwarf planet is covered by young craters that might confirm the theory that the mysterious stains just consist of salt from the planet's interior.

NASA probe Dawn, since March last year, has revolved around the dwarf planet Ceres, the largest object in the asteroid field between Mars and Jupiter.

The probe has sent numerous pictures home – including the odd bright spots, which surprised scientists. The theory behind the bright spots since September last year suggested that the stains are salt concentrations from meteor impacts.

Dawn revolves right now on Ceres at a distance that is closer to the asteroid than ISS on Earth – only 385 kilometers.  From the distance the probe took close-up photos of a number of much younger craters – including Haulani Crater, a relatively young crater, which is 34 kilometers in diameter.

The images show traces of landslides in the crater rim, while the crater is covered by a smooth surface with a ridge in the middle.

By looking at the crater in false colors researchers have gained insight into what materials crater hides – and how they relate to surface texture.

The image above shows bluish material from Ceres interior has been pushed out – a blue color which indicates that the item is relatively young.

Haulani Crater shows perfectly the properties we had expected at a fresh reduction in Ceres surface.  The interior is virtually free of rebates and stands in stark color contrast related to surface older areas, according to Martin Hoffmann from the research team behind Dawn’s camera.

It remains to be seen what the material from Ceres interior consists of, but is expected to be a type of salt.

Dawn probe’s visit to the dwarf planet are Vesta and Ceres which has given scientists plenty of new knowledge about the type of objects – and delivered thousands of fascinating images.

You can view them in the video below.